This is a project developed for an university assignment. The task was to develop an Emergency Braking Assist system for a generic city car, also it had to be compliant with ISO 26262 standard.

Elements of the item

Interaction of the items with other items

The item interacts with the Body Computer through the CAN for receiving the vehicle speed and for providing the brake signal.

Identification of provided functionalities to other items

The item provides the brake signal to the Body Computer through the CAN.

Identification of required functionalities from other items

The item requires the vehicle speed from the Body Computer through the CAN.

To identify correctly the hazards, we can firstly perform the FMEA (Failure Mode & Effect Analysis)

All these failures lead to two main hazards that we have to take into account for the Hazard Analysis and Risk Assessment of the item:

The key point in the identification of the operational situations is that we have to consider also the eventual presence of a following car. Hence we call:

Therefore, the operational situations are the following:

The item shall measure correctly the distance of the preceding vehicle and shall send the brake request only if the condition V2/100<D is verified.

Since an ASIL D combination came out during the analysis, a lot of resources have to be spent in the functional safety concepts definition.

Definition of the Safe State 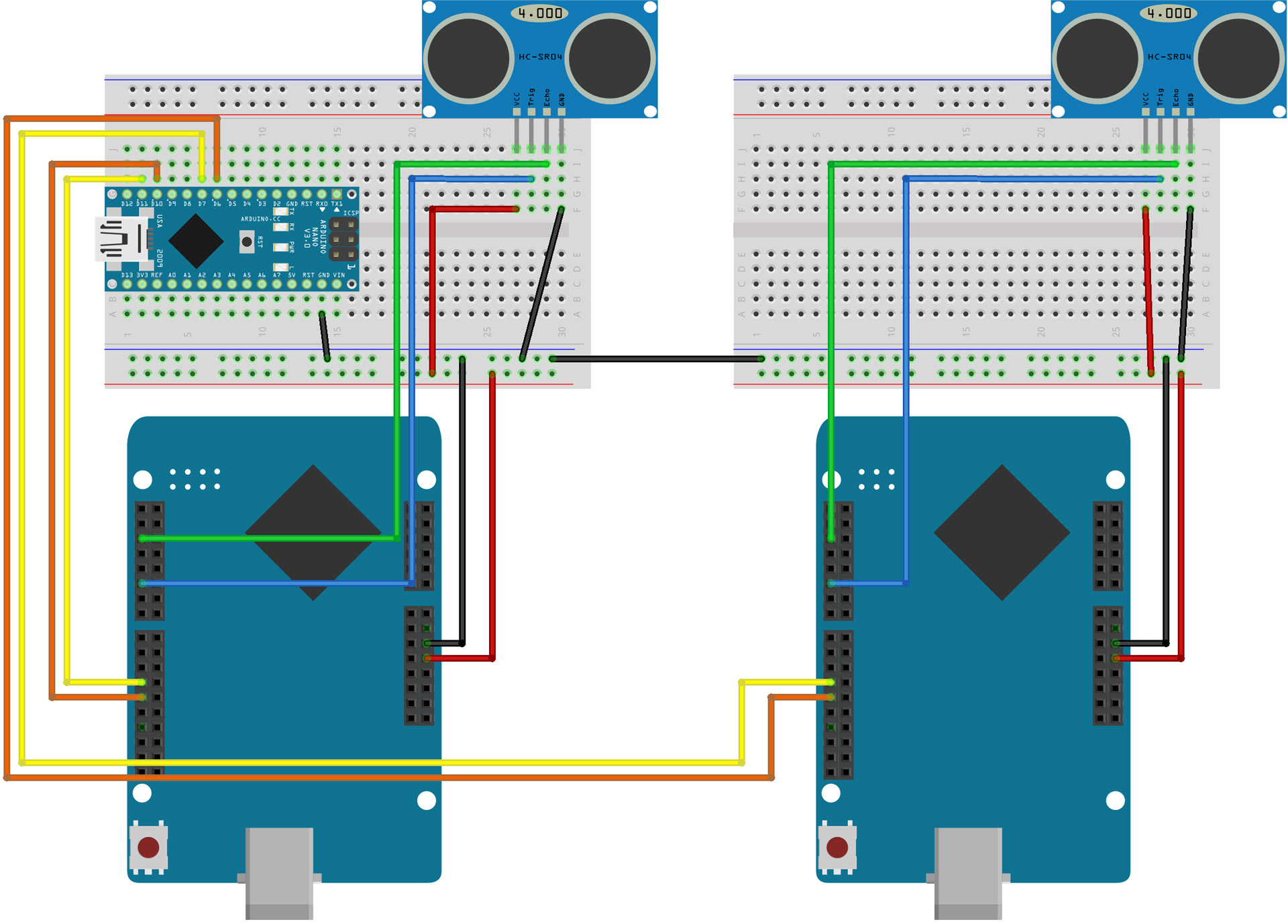 As the ISO 26262 specifies, it is necessary to satisfy some software and hardware rules to operate in a critical safety environment. For this reason, part of the software is produced by automation tools such as Simulink. The hardware platform for the ECUs is Freedom K64F, connected to an ultrasonic sensor HC-04 for distance measurement. Furthermore, an Arduino Nano Pro is used as an external ECU which manages and coordinates the two sensoring ECUs.
The code of the K64F boards is composed by a discrete state part built in Stateflow, then exported in C code and included in the MBED project.

The program is based on the source code exported from the Stateflow chart: the main code manages the inputs and the outputs depending on the ECU working state and tries to catch internal errors.
The following are possibile sources of errors:

Both the network checks (Arduino and body computer connections) are performed through a timer which is stopped and reset only when the signal is good. After a specific timeout, if no good signal is received, then the board put itself in error state.

The timer check is executed asynchronously to the main code using a scheduled routine.

The routine that checks Arduino connection is implemented in a similar way.

Arduino is responsible for the detection of boards’ errors, as they are not completely able to detect a malfunction themself. The following checks are performed on each ECU port (connected to a K64F board):

The software implementation relies on SoftwareSerial library, which allows to build virtual serial ports, overcoming the limit imposed by a single UART connected only to pins 0 and 1. With SoftwareSerial, two software ports are created, but they share the same hardware infrastructure (buffer, clock, etc…) so they need to use the resources alternatively. During the main loop of Arduino code, the control over the serial port is swapped between the two software serial connections.
The message sent from each K64F board to the Arduino is composed as follows:

For each port, the following code is executed:

After the reading of the second serial port, all the checks are performed, and response is sent to the boards:

To improve the system, a bypass communicaton between master and slave can be added, because in case of manager fault the system is not able to work at all. Anyway, in this study, the manager is considered always working properly.

The code is available at the following location.