In machine learning problems, it is often impossible to provide training examples to teach a software agent how to behave in a particular environment. Actually, in some cases, the environment is partially unknown: a specific set of correct and exhaustive input/output pairs can not be determined. In such situations, supervised learning is not feasible because no model of correct behavior is available: a different, model-free approach has to be adopted.
Reinforcement learning uses an environmental value called reward, which has to be maximized over time. With this assumption, all the problems of this type can be solved with a function to be optimized. The software attemps to determine a mapping between states of the machine and the actions that have to be taken to maximize the reward. This is called policy. When the the optimization algorithm converges, only a sequence of actions (optimal policy) is considered and this is the best in increasing the reward.
Q-learning is one of these algorithms and attemps to find the optimal policy using a matrix of pairs between action and states. 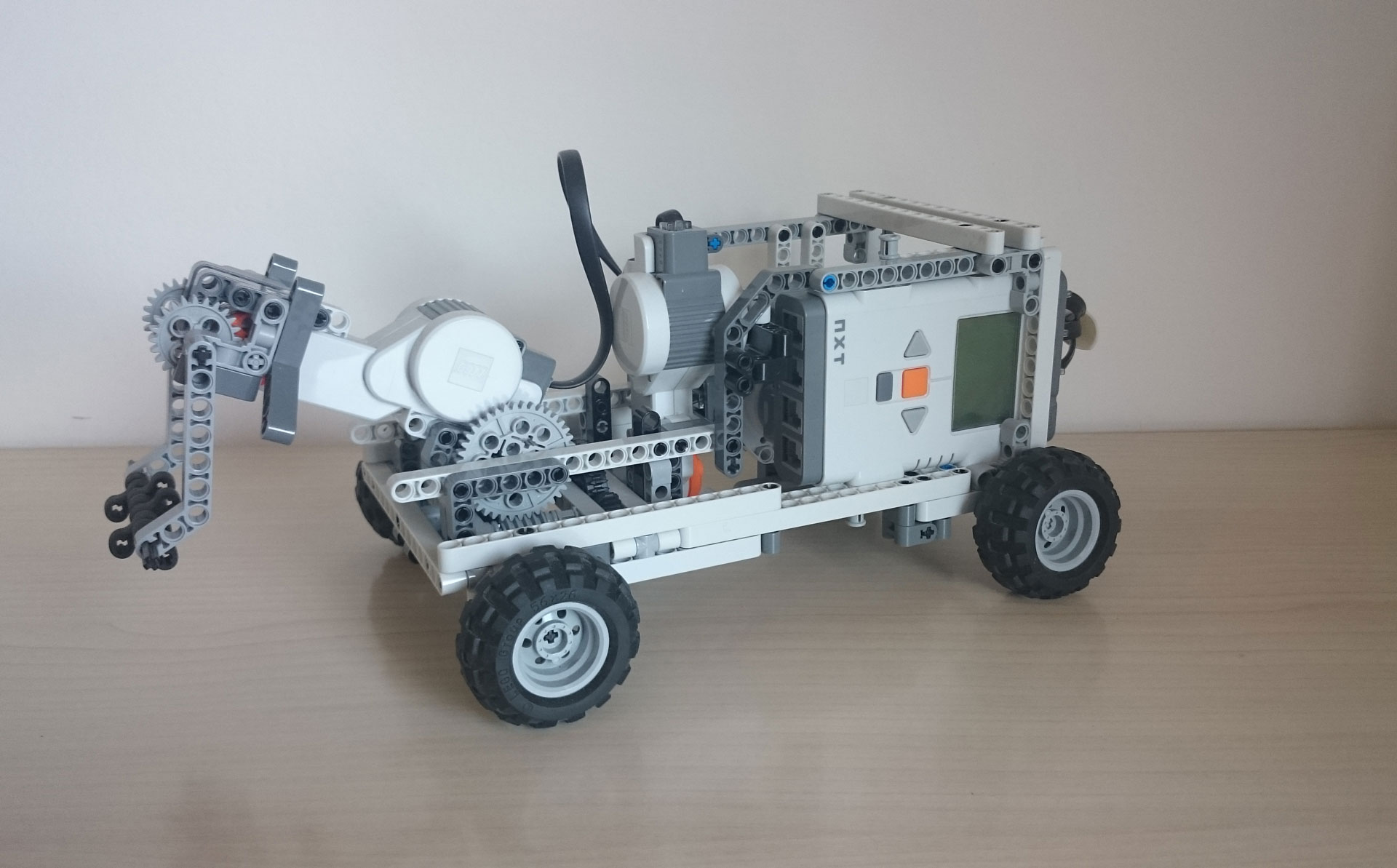 The software is implemented on a LEGO Mindstorms NXT in NXC language, which provides a good flexibility and a low level access to the hardware resources. Our agent is a single armed robot which has to learn how to move its arm to crawl. The feedback of its actions is acquired through the encoders in the servo motor connected to the wheels.
The arm is composed by two joints and two links: arm and hand. The hand has a free extremity, instead the arm is connected to the robot.
To provide better stability and improved torque, some reduction gears have been applied between motors and connected links.
Building instructions can be found here.

For some reason two worm gears are missing in the instructions. It can be figured out which ones they are because without them the arm can not be moved.
Top view of the robot:

This algorithm has three main assumptions:

Model of the environment

In this particular case the robot acts on itself, thus the agent can be considered the environment. In particular it is necessary to define what are the possible states in which the agent can be. In the case of a path finding agent, the states are the possibile positions of the agent in the environment. Instead, for this robot, the states are all the possible position configurations that the arm and the hand can have.
At first glance, the number of total states is the cartesian product of hand states and arm states, nevertheless, arm and hand states are infinite, and the consequence is an infinite number of total states. The solution is to discretize arm and hand positions, for example using a step of 30°. Moreover, both the arm and the hand can not rotate by 360°: the total range, which is smaller, can be measured using the sensor functionality of NXT motors.
For example 4 states will be used for both the hand and the arm: the total number of states is 16. The position of each link will be encoded with a number between 0 and 3.

Given the structure of the agent, only two types of actions can be done for each joint: rotate in a sense or in the other. In conclusion there are 4 overall actions doable by the robot:

The definition of NONE action is important because it is used for the initialization of the vector containing the sequence of actions.

The reward is the movement of the robot: it is measured through the wheels. Also, velocity can be used, but it is required to compute the ratio between the displacement of the robot and the number of iterations.

The algorithm starts with the initialization of all the variables:

Both Q and E matrices should be initialized with zeros.

The two vectors of actions should be initialized with action NONE (-1);

The complete initialization code is the following:

The optimization part consists in a cycle which termines only when the sequence of actions is optimal, i.e. when it is the same of the previous cycle. The cycle is composed by the following steps:

The choice of the action to do is based on two opposite approaches: exploitation and exploration.

There are many criteria to select the right approach: in this case the exploration behavior is used only when acquired knowledge is missing or it is unuseful.
For example, a probabilistic approach could have been applied: the kind of approach adopted depends on the result of a random outcome.

Executing the action is a matter of motor rotation, with some simple lines of code it is easily achieved. It is important to save the motor position before and after the action to compute the value of the reward.

Before the computation of Q and E it is necessary to update the eligibility value of the action done:
$$
E_P = E_P + 1
$$EP is the eligibility of the previous state and the current action.

All these functions have to be used in the main cycle as described before: the following is an example of main function.

The complete code can be found in my GitHub repo, it requires some parameter tuning. The learning is extremely slow, because the machine is intrinsically slow: if you try to simulate the agent with only software you can see results in short time. For code compilation and deployment, BricxCC is a good choice if you are on Windows, otherwise NBC is available for all platforms, but without IDE.